The fiscal systems of cities are defined by the states in which they are located. These systems can create an environment that either allows municipalities to fund their share of resident needs and to thrive economically or constrains the ability of cities to balance budgets and deliver basic services.

Cities and State Fiscal Structures examines how the key components of these systems (fiscal authority, revenue reliance/capacity, state aid and tax and expenditure limitations) are structured across states.

1.       Fiscal Authority: Municipal fiscal authority is a city’s access to general taxes on sales, income, and property. We rate municipalities as having authority if they have an option to levy the tax, local option to control the tax rate (within some increment; they have some ability to shift the rate) and if the revenues are for general use (e.g., not earmarked for specific uses). No state uniformly authorizes its municipalities to utilize all three tax sources. 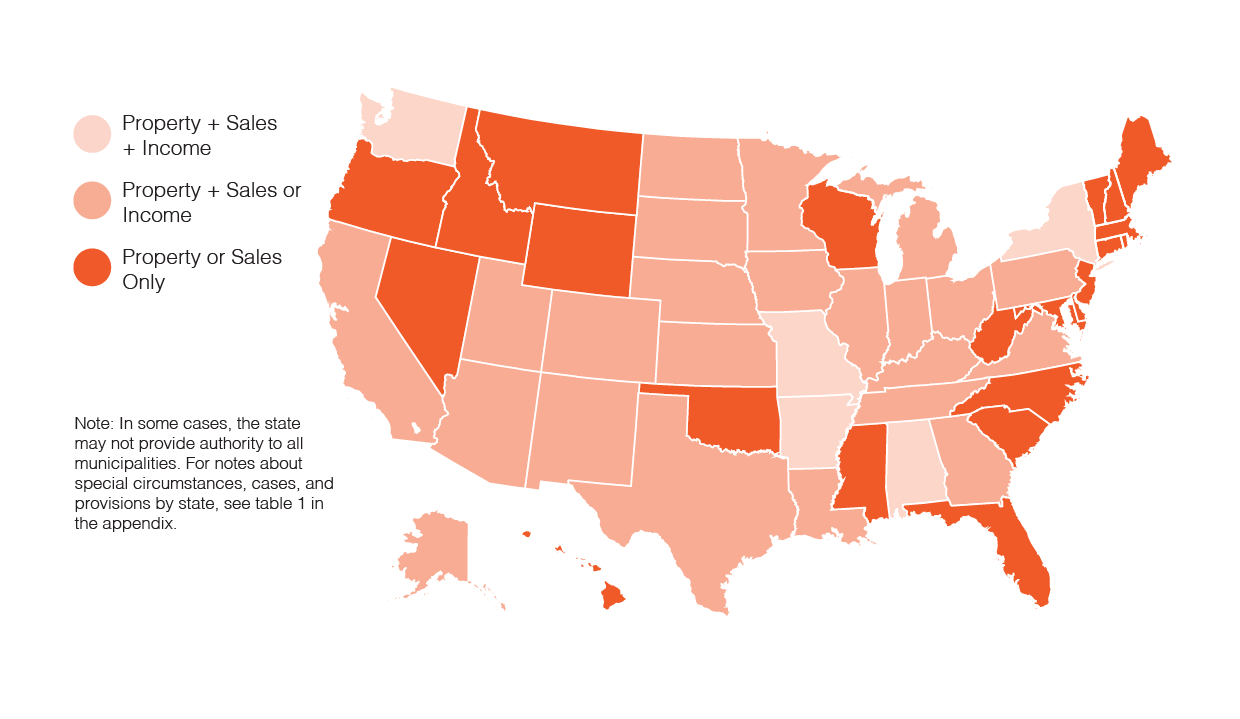 2.       Revenue Reliance and Capacity: Municipal revenue reliance is the proportion of revenues that a municipality generates from its own-sources for general use. It determines whether a city’s fiscal policy decisions can impact its fiscal direction. We examine the share of general fund revenues derived from local sources, including major taxes (property, sales, income) and fees and charges (since fees and charges are usually set locally). On average, U.S. municipalities derive approximately 71 percent of their general fund revenues from own-source revenues, including 24 percent from property taxes, 13 percent from sales taxes, 3 percent from income taxes and 32 percent from fees and charges. 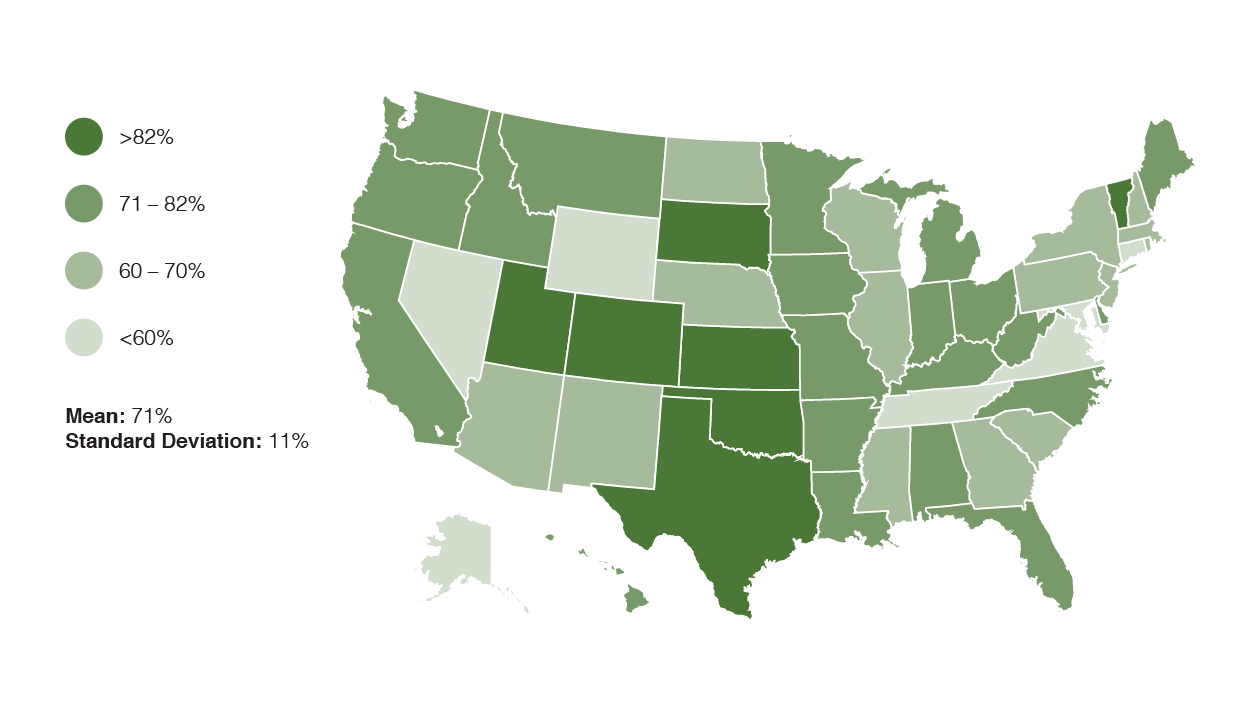 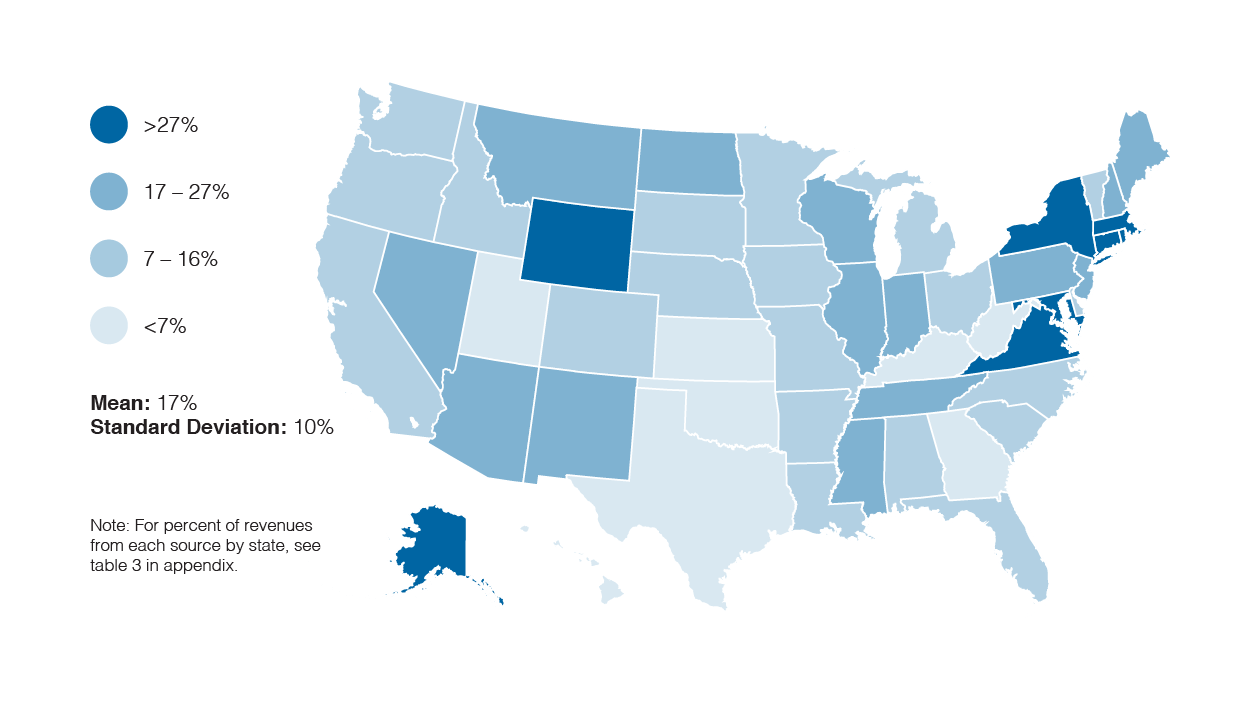 4.       Tax and Expenditure Limits: Voter- or state-imposed (constitutional or statutory) tax and expenditure limitations (TELs) require that local governments tax or spend according to state regulations. There are two types of TELs that we examine – those that constrain the property tax in particular and those that constrain overall revenue spending increases. Currently, 41 states impose some form of a TEL on their municipalities. 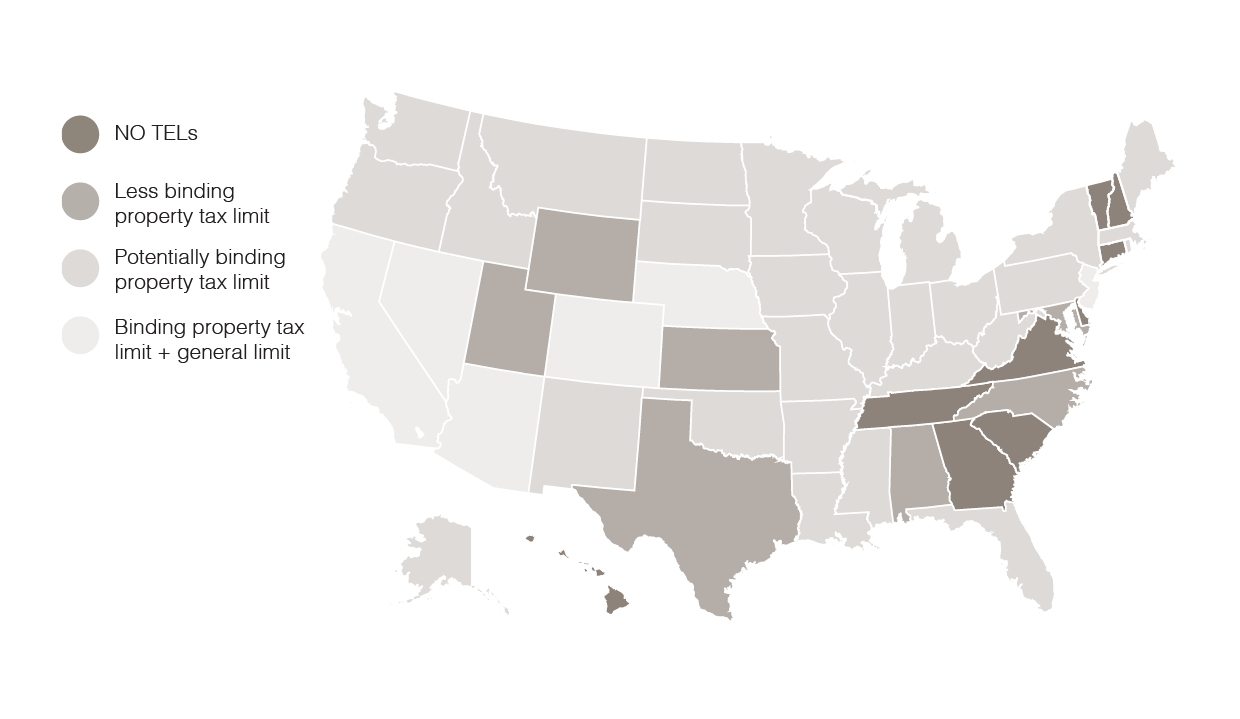 With these criteria in mind, several states stand out as “ahead of the pack,” or provide their cities with a greater degree of local authority than other states.

New York and Pennsylvania also appear to be ahead of the pack. Although New York has a potentially binding TEL, the state does provide additional local authority to a significant sector of the state’s population through granting New York City and Yonkers the authority to levy income taxes. Similarly, Pennsylvania provides some additional local authority through the sales tax provided to Philadelphia (no other municipality in the state is permitted to levy a sales tax), its state aid level is particularly high, but it has a potentially binding TEL.

Due to their broad-based tax bases, municipalities in Ohio, Kentucky and Washington are placed in the “ahead of the pack” category as well. Moreover, even though all three operate under “potentially binding” property tax limitations, the effect is in large part mitigated by the broad tax base. In this regard, municipalities in these states are less likely to adjust tax or assessment issues because the tax bases are flexible and broad. Municipalities in states whose tax bases are narrow might be inclined to adjust their revenues by tinkering with the property tax system; the municipalities in these three states have more options. Hence, we place them in the “ahead of the pack” group.

Compared with the 2008 analysis of cities and state fiscal structures, the lack of change in each of the four structure components is striking given radical economic shifts that have ensued, but not wholly unexpected. Local fiscal health remains below pre-recession levels despite burgeoning broader economic recovery in part because authorization of more local revenue authority and other enhanced capacity measures to allow cities to leverage local economic vitality are rare.