Washington, D.C. – A recent CNBC/Change Research poll found that more than two-thirds of voters support relief for state and local governments facing unprecedented shortfalls due to the pandemic. 69% of voters surveyed at the end of July indicated they support the federal government providing aid to state and local governments that are being forced to cut critical municipal services, cancel job-creating infrastructure projects and lay off essential employees due to fiscal pressures caused by the coronavirus outbreak. 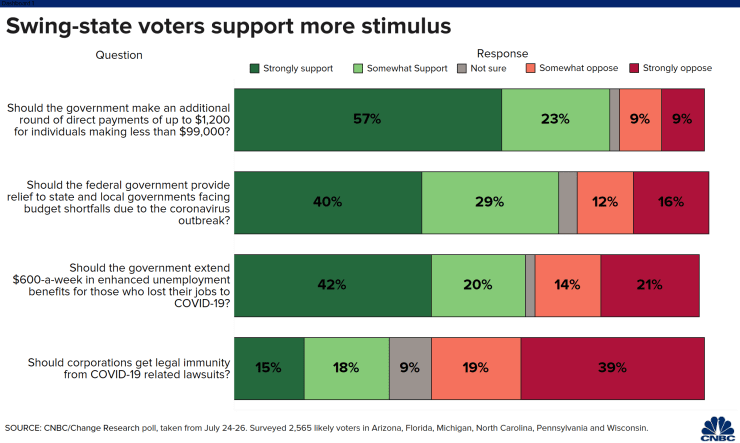 This resounding support from voters comes on the heels of calls from local municipal leaders across the country, who urged Congress to provide direct federal aid to U.S. cities, towns and villages after Senate Republicans excluded aid to local governments in the HEALS Act unveiled on Monday. Local leaders made clear that previous aid allocated under the CARES Act was not nearly sufficient to address the severe budget shortfalls municipalities are facing due to the bipartisan shutdown of local economies everywhere.

“In principle, we’re asking for direct and flexible aid for local governments. In reality, all we’re asking for is a fighting chance. Flexibility for previously allocated CARES Act funding is just a drop in the bucket. We are looking for a full pail of water,” said Savannah, Georgia Mayor Van Johnson. “Communities are desperate for recovery and a triumphant return to being the backbone of America’s economy.”

Additionally, a FiveThirtyEight survey showed that 85% of economists believe funding to state and local governments must be among the top three priorities for lawmakers as negotiations continue on the next coronavirus relief package. Top economists, including current and former chairs of the Federal Reserve, agree that direct federal aid to local governments is essential to our national economic recovery.

“State and local is going to be a huge drag on the economy because they are a sizable share of spending, cannot really run much in the way of deficits, their tax revenue is badly hit and Congress has done little to help so far,” said Jonathan Wright, an economics professor at Johns Hopkins University.

Last week, National League of Cities (NLC) Executive Director Clarence Anthony responded to the release of the HEALS Act, calling for lawmakers to heed the warnings of local leaders and top economists that failure to provide direct aid to municipalities will further slow our national economic recovery efforts.

“As cities, towns and villages everywhere have made clear, there will be no national economic recovery without a clear commitment from the federal government to address the staggering revenue shortfalls and skyrocketing costs that local governments have been forced to incur due to the bipartisan shutdown of our economies and communities,” Anthony said. “Today’s proposal ignores not only the warnings of local leaders, but also those of economists who have cautioned lawmakers about the devastating long-term impacts of failing to address local government revenue shortfalls.”

NLC launched the Cities Are Essential campaign in May, calling on the federal government to ensure there is flexible, direct funding relief provided to America’s municipalities.