WASHINGTON – May 23, 2019 – As federal policymakers struggle to find consensus on many of the toughest challenges facing the country, mayors are focused on grounded solutions to critical national issues. Today, the National League of Cities (NLC) released the sixth annual State of the Cities report that analyzes more than 150 annual speeches given by mayors from cities, towns and villages across America. While economic development and infrastructure continued to top the list of issues, the report found that subtopics including climate change and the opioid epidemic revealed that mayors are having nuanced conversations about the issues hitting their communities the hardest.

“While Washington talks, mayors take action. As the government that’s closest to the people, mayors work every day to reach across the aisle, bring people together, and find solutions that help our residents,” said NLC President Karen Freeman-Wilson, mayor of Gary, Indiana. “Whether you’re talking about infrastructure or climate change, mayors know that local action is critical to making our cities, towns and villages more sustainable and economically competitive. The State of the Cities report shows that mayors are addressing these issues head-on and are planning for the long-term health and wellbeing of their communities.” 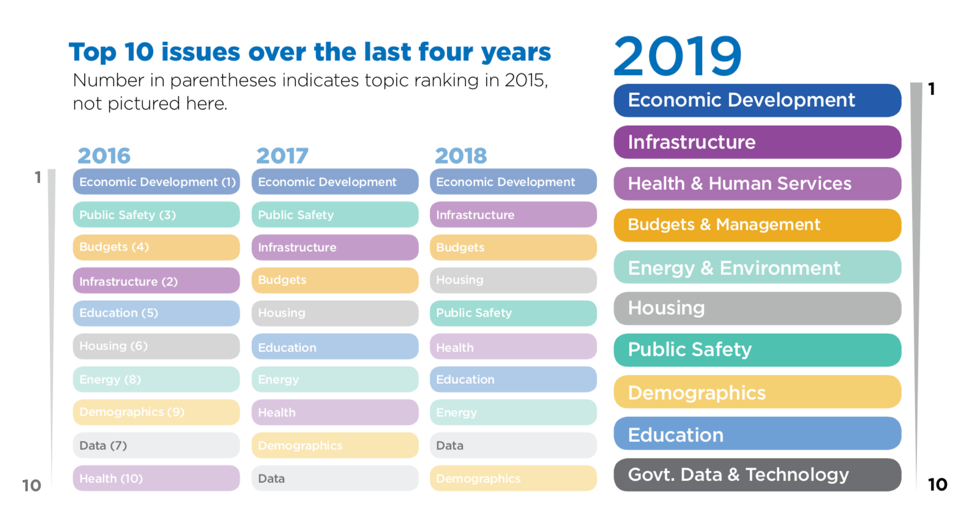 “Nothing affects the quality of life in our neighborhoods more than the condition of our infrastructure and roads.” Mayor Kevin Faulconer of San Diego, California (January 15, 2019)

Over the past four years, infrastructure has risen steadily in the rankings to take the second place spot in 2019. This year, technology-driven solutions to traffic and pedestrian safety stood out when mayors talked about infrastructure. Traffic calming strategies and flow improvements, including synchronizing traffic signals and redesigning intersections, were cited by mayors as ways to improve access to amenities and enhance safety.

NLC and local leaders are urging federal leaders to pass comprehensive infrastructure legislation this year. A strong federal-local partnership is important to ensuring that infrastructure investments are made in the projects that best serve local communities.

“Reaching these goals is critical, not only to our region’s air quality, but to help stave off the effects of climate change which put at risk our water, forests, outdoor tourism, and the brave members of the Salt Lake City Fire Department.” – Mayor Jackie Biskupski of Salt Lake City, Utah (January 17, 2019)

With federal inaction on environmental issues like climate change, mayors are increasingly prioritizing clean energy, local ways to reduce air pollution, and municipal recycling. Following the U.S. withdrawal from the Paris Climate Agreement in 2017, more than 400 mayors have committed to adopt and honor the goals of the agreement.

“Another example of our investment in people is seen in our response to the opioid crisis. It’s no secret that Dayton has been hard hit by this crisis that has resulted in a rash of overdose deaths. But it is also no secret that our community has proven to be extraordinarily resilient in the face of this human tragedy. We are investing in people by supporting an infrastructure for recovery from addiction, and our efforts have become a model for other communities to follow.” – Mayor Nan Whaley of Dayton, Ohio (February 13, 2019)

About the Report
State of the Cities is a first-of-its-kind report that benchmarks the top issues that mayors are talking about and the factors driving those priorities. The issues and subtopics were identified through a content analysis of State of the City speeches delivered between January and April 2019. Speeches are coded as having covered an issue if the word count for subtopics within that issue constitutes at least 10 percent of the speech. The analysis only included an issue or subtopic if a mayor indicated a specific plan, goal or impact for 2019 or the future.

The 2019 State of the Cities report can be downloaded in PDF format here.